Leave it on the field 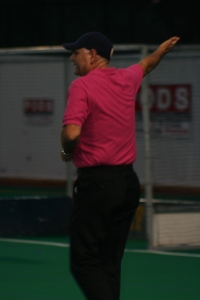 The advice that is often given to players, coaches and umpires is “leave it on the field” when it comes to the little fractious and contentious moments in the game. This weekend I had the distinct honor to umpire in the Irish Premiere League a match between Ballynahinch (“Hinch”) and Antrim at the lovely Donard Park fields in Newcastle under the ancient gaze of Slieve Donard. Though honors were even at half time Antrim should have been 4 or 5 goals up. In the second half Hinch fell apart and saw the final score 6 to 0 to the visitors.

The game was intense and fast and strongly contested. The pace fast and the skill level as good as you’ll see in the EHL. Two incidents however stand out; a very controversial goal and an equally controversial penalty stroke decision. And, of course, both at my end. After the game, as players were “leaving it on the field”, they confessed that yes it was a good goal call and yes the stroke was right too. Nice to know.

When I made those decisions (in the 2/100ths of a second we get to process all the real-time data that brings the whistle to our lips) I was reasonably confident that I had made the right ones. My experience, good positioning, the sound stick and ball contact makes, the reaction of the players, all told me I was right. But there was doubt as with any tough decision.

After the goal and the stroke play resumed: just as fast, just as intense as it had been from the first whistle. If I had let myself worry about my decisions my eye and my brain would have been off the game and my subsequent decisions likely would have less confidence and not followed my training and instincts. I had made a decision and I and the players had to live with it and deal with whatever comes next.

A game of hockey is over in 70 minutes. The decisions stand at the end of the game. The score reported to the local papers and, hopefully, the story printed is about the game and not the officials.

When we run our businesses we can’t be afraid of making decisions and implementing them. We do need to live by them, learn from them and make better decisions next time. Like everything we do it is a matter of practice. The more we practice decision making the better we become at it.

1 Response to Leave it on the field