Three teams on the field 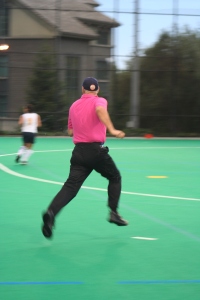 Get ahead, stay ahead, support your partner

It’s been a while since I talked about hockey here in the blog. I was reminded of this a week ago when I attended the USA National Field Hockey Festival in West Palm Beach in Florida. Festival, to use it’s short name, is the largest single hockey tournament in the world with 4,000 athletes and over 250 umpires and coaches.

One of the wonderful things about umpiring hockey is that it is unique in the world of officiating. Hockey umpires do their very best to disappear into the turf and let the game flow. Whistles are firm but sort. Signals are crisp but not flamboyant. Uniforms are dark and understated. And, above all else, umpires have the discretion to make no-call, and are encouraged to do so as often as they can, when there is a clear advantage to the player for them not to whistle.

Often the target of coach abuse, too too frequently the source of fan abuse and, tragically these days, regularly subject to player abuse, umpires have an impossible job. A colleague umpire once said “The trouble with umpires is they don’t care who wins.” And that seems to be the detail that coaches, fans and players forget. And on a hockey field, where the umpires are doing their very best to be the least important part of the game,  coaches, fans and players take our lack of whistling as a sign of weakness at best and incompetence at worst.

There is maybe one in ten of the coaches, one in a hundred players and one in a thousand spectators that knows just how much training and studying each umpire does in an average year. All the umpires, on every game this year, was evaluated and most given feedback on their performance.

But most of all only those umpires on the field know that they are communicating with each other. What goes by to the untrained eye is that almost every decision an umpire makes is checked and validated with their partner. If you really want to see the inner workings of a game of hockey watch the other umpire, not the one who is making the calls as the ball is in their part of the field, but their partner. Look where their partner is. They are getting a different angle on the play, they are watching for off-the-ball nonsense, they are positioning to see the ball trajectory, they are watching their partner and shifting and adjusting to be in the best place to help. And when the umpire looks for help the partner is there with a clear signal. Nine times out of ten the coach/fan/player won’t even notice the look for help. And on the tenth time it is only because the umpire has paused play and walked over to get it in person.

Yes there are three teams on the field. And the team that has never scored a goal is the best one out there.

Web Admin
View all posts by Admin →
This entry was posted in Tales from the hockey field and tagged About me, Field Hockey. Bookmark the permalink.